I want to try two new things this month:

For a couple weeks now, I’ve realized my mind’s been rather unfocused and scattered–likely due to my spending a large part of the day on and off social media. I’m hoping this will help me re-ground myself and help organize my “monkey-brain.” I’ve also been curious as to how I’m actually using my time, rather than how I perceive to be using it. Finally, it’s something I’ve been wanting to try for a while.

With regards to experiment #1–Tim’s podcast, The Tim Ferris Show was influential in trying this out. In several of his podcasts, Tim talked about how he used to have a job requiring him to record his entire day–every 15 min. He mentioned that, while this was unsustainable and cumbersome, it allowed him to gain a tremendous amount of insight into the one resource we can’t afford to waste: time.

Tim also mentioned the book, “The Effective Executive” by Peter Drucker numerous times in his podcast–which I finally picked up and read earlier this year. In the book, Drucker also stresses the importance of understanding and managing your time effectively. He suggests executives to employ secretaries to shadow and record all the different ways you spend your time. Unfortunately, I can’t afford a secretary 🥲 but I do have some tools that I’ll be using.

As for experiment #2, this is a meditation technique that Naval uses. I first encountered Naval in a random Clubhouse room and soon realized he was a wildly intelligent individual who had, evidently, spent a lot of time critically thinking about a great number of topics. And in one of his podcast episodes (can’t remember which one), he talked about how transformative this hour was for him–and suffice to say, I was convinced. 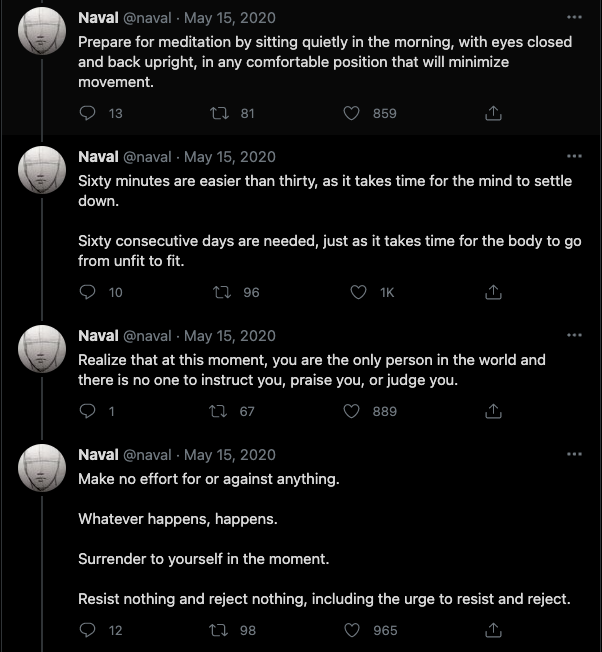 For experiment 1, I’ll be using the following:

Toggl Track is very simple–as you’re working or going about your day, set timers with a prompt. 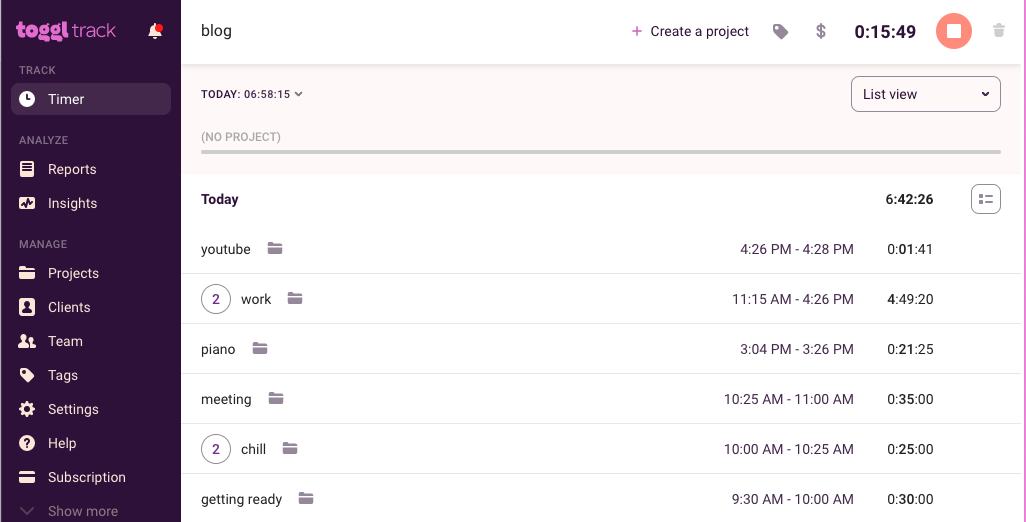 As long as you remember to use it, you can categorize and track your time effectively–which brings me to the second tool: Apple Watch.

I originally intended to create an Apple Watch app to do run some fancy CRON job every 15 min with speech-to-text transcription instead of using Toggl Track, but after spending some time trying to sift through Apple’s horrible documentation, I decided it wasn’t worth the effort. Instead, I have the Apple Watch set to chime every 15 minutes to remind myself I need to track my time (or backfill some entries). So far, it’s been very effective.

I’m writing this blog post a couple days after I started, so here are my first impressions.

Realizing I’m not spending as much time as I think I am on work (perceived effort vs actual effort). This is actually a good thing for me. When I’m conscious about tracking time, I tend to become hyper-aware about spending time on things like social media or Youtube. Also a good thing but the experiment becomes a little “biased” I’ll likely be adjusting my schedule as I start to better understand my time usage over the month.

Hard to change my schedule to wake up earlier than normal Almost feels like sleeping Ego tends to surface up Hopeful that it might be a way to engineer the 3AM effect.

It’s been over two months and I’m finally back to write about my conclusions… Surprisingly (or unsurprisingly), it’s not all too different from my initial impressions.

The first challenge was a success; I recorded my time religiously in May–and found the biggest revelation to be my disillusion of effort. As a result, I’m more content (not angry at myself for thinking I got less done in a given time frame) and more effective with my time. Even though I’ve stopped tracking my time meticulously, I’m way more aware of how I’m actually utilizing my day–and try to structure each one with a purpose. In fact, I’m now mimicking some of Dr. Huberman’s daily/morning routines (and it’s great!)

The second challenge was an absolute failure; I probably successfully spent 3 mornings total doing nothing for an hour. To be quite honest, I can’t say this method was for me; I felt way too anxious during this hour. It was also hard to not drift off into a state of slumber. I may revisit this idea in the future, but as of now, I don’t think I can realistically introduce this in my day.

Overall, I’m immensely satisfied with the experiments. The revelation from the first challenge itself is worth SO much–and I’m glad I had it earlier than later.